Brandy & Monica – The Boy Is Mine (CD Single) 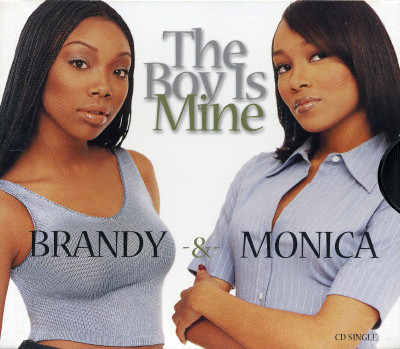 Brandy & Monica – The Boy Is Mine (CD Single)

“The Boy Is Mine” is a 1998 duet by American singers Brandy and Monica. It was written by LaShawn Daniels, Japhe Tejeda, Fred Jerkins III, Rodney “Darkchild” Jerkins, and Brandy, while production was helmed by production by Jerkins, Brandy, and Dallas Austin. It was released as the lead single from both singers’ second albums from 1998, Never Say Never by Brandy and The Boy Is Mine by Monica. Inspired by Michael Jackson and Paul McCartney’s 1982 duet “The Girl Is Mine”, the lyrics of the mid-tempo R&B track revolve around two women fighting over a man.

The song received generally positive reviews from music critics and was the first number-one pop hit for both artists, in the US and internationally. Exploiting the media’s presumption of a rivalry between the two young singers,[3] “The Boy Is Mine” became the best-selling song of the year in the US, selling 2.6 million copies, and spent 13 weeks at the top of the US Billboard Hot 100. It became the second song in the history of the chart to ascend directly to number-one from a previous position beneath the Top 20, at number 23, following The Beatles and the 27–1 leap of their single “Can’t Buy Me Love” in April 1964. Internationally, the single also achieved a strong charting, peaking at number one in Canada, the Netherlands and New Zealand, while reaching the top five on most of the other charts on which it appeared.

The accompanying music video, directed by Joseph Kahn, starred the singers and Mekhi Phifer. It was nominated for two MTV Video Music Awards, including Video of the Year and Best R&B Video. In addition, “The Boy Is Mine” was awarded the Grammy Award for Best R&B Performance by a Duo or Group and received nominations for both Record of the Year and Best R&B Song in 1999. At the Billboard Music Awards, the song won in three categories, including Hot 100 Sales Single of Year. In 2008, Billboard listed it 54th on its 50th Anniversary All-Time Hot 100 Top Songs chart and 18th on the All-Time Top R&B/Hip-Hop Songs countdown.[4] In 2012, the singers reunited on the single “It All Belongs to Me”.