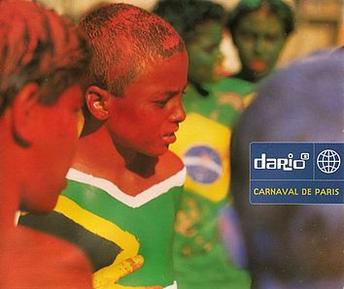 Dario G is the name of a dance music trio from Cheshire, England. The act was named after the manager of Crewe Alexandra, Dario Gradi. Its founder members are Paul Spencer, Scott Rosser and Stephen Spencer (the Spencers are not related). Paul Spencer is the only remaining member of the trio. To this day, their song Carnaval de Paris is played at many big sporting events.

The origins of the melody come from the world of football. During a 1996 pre-season tour of The Netherlands, Sheffield Wednesday F.C. picked up on a chant sung by the fans of FC Utrecht, with a tune inspired by the folk ballad “Oh My Darling, Clementine“. This was then adapted and brought back to England for the following 1996–97 FA Premier League. The chant was sung extensively at the home game with Nottingham Forest on 18 November 1996 helped by the club’s resident band. This was slowly picked up by other clubs in the Premier League, helped by the use of it at England matches (where the Sheffield Wednesday band were now invited to play).[1] Sheffield Wednesday had already lost their “barmy army” chant to the England cricket team and also other football clubs.[2] In an effort to either stem this spread of the song (or just to keep it unique), the fans of Sheffield Wednesday added their own lyrics to the theme (which continues to this day).[3] This happened around the time of the Dario G single release.