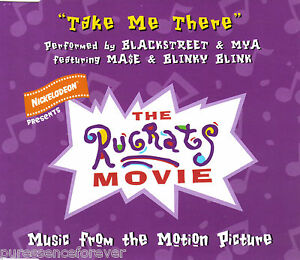 “Take Me There” is a contemporary R&B song by American quartet Blackstreet and singer Mýa. It also features Bad Boy rappers Mase and Blinky Blink. It was written by Mase, Michael Foster, Madeline Nelson, Tamara Savage and Teddy Riley. Riley also produced the song. The song serves as the theme song for the animated feature film The Rugrats Movie, and was released in November 1998 in the United States as the lead and only single from the soundtrack. It also appeared on Blackstreet’s third studio album, Finally.

“Take Me There” was released as a single in November 1998 and experienced worldwide success. It reached number one in New Zealand for three weeks in January 1999 and achieved Platinum status. In North America, the song peaked at number 14 on the US Billboard Hot 100, number two on the Billboard Rhythmic Top 40, and number 21 on the Canadian RPM Top Singles chart. It also became a hit in several European nations, peaking at number seven in the United Kingdom, number nine in Ireland and number 22 in the Netherlands.